The Covid Chronicles team consists of a group of cultural producers (photographers, writers, artists, musicians and curators) and researchers with direct personal experiences of forced migration and/or experience of working with organisations who support them. We reach out to contributors through our networks to involve migrants locally, nationally and internationally in exploratory research about the impact of the pandemic on their lives.

We organise participatory arts workshops and work with individuals to support them in creative activities as well as training in digital storytelling. We offer a platform for exhibiting creative work to promote self expression and improve representations of migrants in the public sphere, promote migrants rights and security and impact on migration policy. 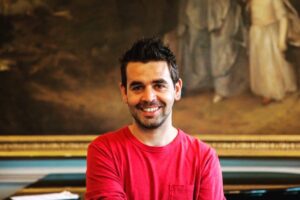 Ahmad was born in Aleppo, Syria. He studied English literature before fleeing the Syrian conflict to the Kurdistan region of Iraq in late 2012. Ahmad worked in Iraqi Kurdistan as a volunteer, teaching English in Syrian refugee camps.

In mid-2013 Ahmad joined UNICEF to work for both the Syrian refugee response, and the Iraqi displaced people response after Mosul fell to ISIS in 2014. Since his arrival in the UK in mid-2015, Ahmad has been working with various groups and organizations raising awareness about the Syrian crisis and the plight of refugees in the region. In 2017, Ahmad graduated from SOAS – University of London. He holds an MSc in Violence, Conflict and Development. 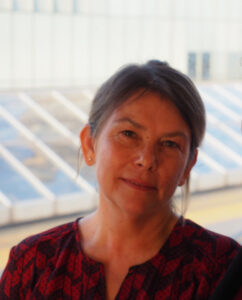 Marie is Professor of Sociology at the Open University. She trained as an anthropologist and ethnographer. Her teaching and research interests revolve around media and migration, diaspora cultures, politics and social change.

Recent research includes projects on forced migration, digital connectivity and civic engagement among Syrian and Iraqi refugees. Since 2015, she has done extensive fieldwork in refugee camps on the island of Lesvos, Greece and at Za’atari and Azraq in Jordan working with UN Women on research aimed at digital inclusion and education. She has worked on culture and diplomacy projects around active citizenship in Egypt and Ukraine with the British Council and Goethe Institut. Marie has published extensively on migrant transnationalism, political communication and securitization.

For five years she worked in banking and finance before turning her attention to working with various Black and Minority Ethnic, Asylum and Refugee Support organisations both as a volunteer and as an employee. Currently, she is employed by the Ethnic Minorities and Youth Team, Wales (EYST) where she works as a Crisis Project Administrative Officer – in particular, supporting youth through the Covid-19 crisis. Thanu has extensive experience of working in the voluntary sector and with charity organisations promoting Black and Minority Ethnic Rights and personal, social and educational development in Swansea. She is a longstanding member of the Management Committee at Swansea’s City of Sanctuary and of Swansea Women’s Group. Across these different domains, Thanu has applied her skills in accounting, business administration, marketing, communication, photography and graphic design. Thanu has trained as a mentor and has a lengthy experience of mentoring, advocacy and support work. Currently, Thanu is actively participating on a voluntary basis in a wide range of Covid 19 support initiatives in Swansea. 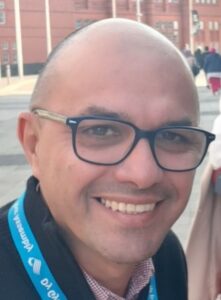 Carlos current works for Ethnic Minority Youth Team (EYST) in Swansea, supporting Black and Minority Ethnic youth via educational and personal development programmes. He developed his career as socio-cultural facilitator in the fields of community development and leadership in parallel with professional counselling skills.

Over the last 14 years Carlos has delivered more than 800 talks and workshops on adult education and self-empowerment, citizenship skills and human rights in the context of critical thinking, reaching 16000+ people. He enjoys developing blended human-technological learning experiences, e-learning programmes, instructional design and collaborative knowledge production. He has produced a dozen short multimedia courses on topics such as reflexive introspection to self-achievement and life purpose. He carried out most of his studies in Venezuela and holds an undergraduate degree in Religion and Philosophy (IUNAV), a diploma in Adult Education and Lifelong Learning (IMCEC), an Associate degree in Graphic Design (UNIR Technology College). He is currently undertaking an online degree in journalism (Catholic University Cecilio Acosta). He is also studying for an online Masters degree, Counselling (Grace School of Theology, Texas University). As a refugee from Venezuela, he works closely with a range of local NGOs and charities supporting asylum seekers and refugees, homeless and people with addictions in order to assist them in overcoming personal traumas. 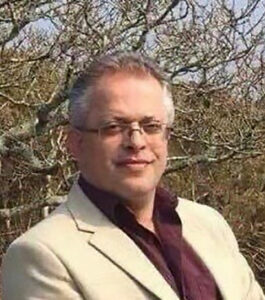 I was born in Sardasht, Iran where I studied Persian literature at undergraduate level. I came to the UK as a political refugee in 2007 and now I’m a British citizen. I am an interpreter for Kurdish asylum seekers and refugees.

I translate from and into Kurdish, Farsi, Turkish (Azeri) and English with Wales Interpretation and Translation Service (WITS) which provides services to local government, legal and health systems across Wales. I am also employed as an interpreter for “Just About Words” – an immigration law firm. I studied interpreting at the Continuing and Professional Education Department in Cardiff University where I qualified in Public Service Interpreting – Local (2010); Public Interpreting – Law (2011); Public Interpreting- Health (2019). I also qualified as an interpreter for Trauma Counselling with and worked for the African Community Centre (2018-2019).

Since arriving in Swansea I have volunteered in many organisations in Swansea as an interpreter including: the British Red Cross; Welsh Refugee Council; Racial Equality Services; Citizen Advice Bureau in Swansea. In my spare time, I write as a journalist and activist campaigning for freedom for Kurdish people living under repressive regimes. 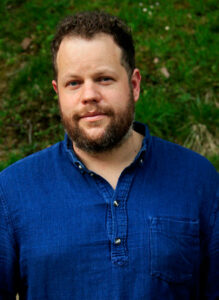 Owen is an artist and creative producer based in Wales. In 2014 he was a British Council Research Fellow researching community growing networks, food politics and poverty in California. In 2016 Griffiths was awarded Creative Wales Ambassador by Arts Council of Wales researching land use, social justice, community and participation through food, placemaking and regeneration.

He has worked with communities to explore collaboration, climate justice, landscape and radical methods of participation.  From 2017-19 he was a co-director of Gentle/Radical, he graduated from the School of Walls and Space at the Royal Danish Academy of Fine Arts in Copenhagen. He is now a founder director of Ways of Working, a social enterprise working on community development, sustainability and social justice. He is in the process of developing a number of radical green civic spaces across the city of Swansea working with partnerships and communities to co-design and create these. 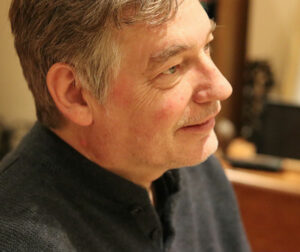 Tom is Professor of German Studies at Swansea University. He is a cross-cultural researcher, critic, editor and translator; co-founder and trustee of Swansea Asylum Seekers Support; co-founder of Hafan Books. 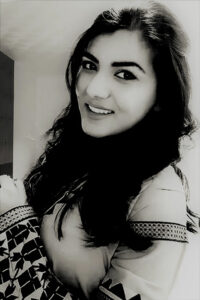 Naila is an artist. She graduated with a BA Hons Degree in Surface Pattern Design from Swansea College of Art in 2020. Her work combines cross-cultural motifs with hand-printed patterns.

She draws inspiration from design and pattern work from South Asian culture and in particular her childhood and youth in Pakistan – a home that she was forced to flee due to religious persecution. She has since made Swansea her home. Nylah’s love of textured surfaces and detailed conversational patterns is evident in her designs. Trained in printed textiles, her background in furnishing fabrics and traditional printing techniques, tangibly informs her art, exploring the relationship between patterns and cultures.

As well as constantly developing her personal practice and creating prints, Nylah has worked on a range of national and international projects and won several prizes including: Idott – Winner of National Wallpaper competition 2020; Winner of AVA Training 2020; Orangebox- designed a hand printed items for Orangebox furniture company; St.Fagans Museum, exhibition of her hand printed fabrics. Nylah has also exhibited at the National History Museum Wales,and the National Wool Museum, in particular, her hand-embroidered tea towels in response to ‘Women in the War’. Further exhibitions of work include at Clerkenwell Design Week in London and the Waterfront Museum in Swansea.
Follow Naila on Instagram @NylahMAK or visit her website. 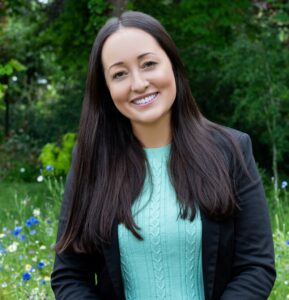 Heidi McCafferty is the founder of HM Consulting and Son where she and her team work with academics, universities and NGOs to bid for and deliver research projects.

She has worked in the Higher Education and non-profit sectors for 10 years and supports our project by managing communications and digital engagement. In her own time, Heidi is studying for an MSc in Criminology Race, Crime and Justice at Birkbeck, University of London and is heavily involved in criminal justice reform in the United States. 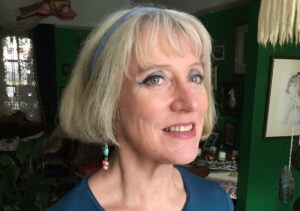 Jeni Williams is a Senior Lecturer in Literature and Creative Writing at the University of Wales: Trinity Saint David She is a poet and cultural critic who writes on literature, theatre and art with particular interests in gender, ethnicity and disempowerment.

She is deeply concerned with the politics of marginality and has published widely on Welsh Writing in English. She is a founder member of Wales PEN Cymru and serves on both the Executive and the Translation and Minority Linguistic Rights committees. Having worked closely with refugees and asylum seekers since 2004, she is a founder member and long time Chair of Swansea Women’s Asylum and Refugee Support Group.

She has published poetry in many journals and anthologies. In 2016 she was shortlisted for The Live Canon International Poetry Competition and longlisted for The University of Canberra Vice Chancellors International Poetry Prize. Her first collection, Being the Famous Ones, appeared in 2009 with Parthian books. She has translated poems from Arabic, Welsh, Chinese and Swedish, run occasional poetry workshops with asylum seeking and refugee women since 2006 and co-edited 2 collections of this work: Fragments from the Dark: Women Writing Home and Self in Wales (Hafan, 2008) My Heart Loves in My Language (Hafan, 2017). 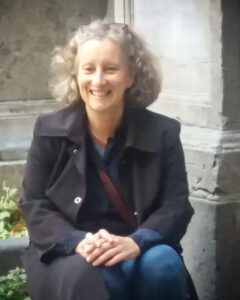 Helen is Assistant Professor in Development and Social Justice at the International Institute of Social Studies in The Hague. She is interested in the comparative asylum policies of EU member states in the context of broader post-colonial relationships and ideas.

Her particular interests are in pro-asylum advocacy networks and activists, the politics of selective urban surveillance of undocumented rejected asylum seekers, and networks of ‘cities of sanctuary’, as part of broader resistance to deterrence-based measures of destitution, detention and forced deportation. Her regional focus on the countries of the African Great Lakes region, especially Rwanda and Eastern DRC, and the relations of francophone Africa with EU member states. She works on peace building, including through music and the arts.